SolTech’s Green Bond issue subscribed to 70 MSEK and is complemented with a 100 MSEK credit in China
Advanced SolTech Sweden AB (publ), ASAB – jointly owned (51%) by SolTech Energy Sweden AB (publ.) and (49%) by SolTech’s Chinese partner, Advanced Solar Power Hangzhou Inc., ASP – released a prospectus directed towards the general public, on September 20, 2018, covering a 5-year, 150 MSEK bond offer, paying an 8.25 percent interest rate annually through to November 8, 2023. All told, circa 1,290 investors subscribed to bonds amounting to a total sum of approximately 70 MSEK. Plans calling for the bonds to be listed on Nasdaq First North Sustainable Retail Bonds are underway, with first trading day tentatively scheduled to take place on November 12, 2018. In addition, a financing credit has been established in China for a maximum amount of 100 MSEK carrying an annual interest rate of 8 %, and it is to be amortized over the span of three years.

The subscription period ran from September 24 to October 15, 2018. Proceeds from the bond offer provided ASAB with approximately 70 MSEK before deduction of customary new issue costs, and circa 1,290 investors have been allotted bonds within the Offer.  Distribution day for the bonds is November 9, 2018. The Financial Advisor was Avanza Corporate Finance. ASAB’s function within the SolTech concern is to finance its business operation in China, which is carried out by its fellow subsidiary, Advanced SolTech Renewable Energy Hangzhou Co. Ltd., ASRE. In common with its Swedish-based fellow subsidiary ASAB, ASRE in China is also 51% owned by SolTech and 49% owned by ASP. The remaining capital required for achieving the goal set for 2018 will be partially met in form of bank loans, leasing and other credit arrangements in China and Europe, and partly by investment of the ownership’s own capital, along with capital provided by the proceeds of new bond issues carried out throughout the year.

Today’s currently installed and coupled installation capacity of 52.21 MW annually generates approximately 70 MSEK in income.  Taking into account the liquidity provided by SOLT 3, the current SOLT 4, a lease financing credit for max 100 MSEK in China – along with inclusion of the just-cited currently coupled installations – calculated total capacity coupled to the central electrical network comes to circa 80 MW, annually generating approximately a total of 104 MSEK in income over the coming 20 years.  Of this sum-total amount, 51 percent will be recorded on SolTech’s accounting records in accord with the Proportional Method.

CEO Stefan Ölander comments:
– Subscription to the bond offer was lower than expected. During the subscription period, our backorder log in China – in addition to the 24 MW we already had on the books – increased by circa 10 MW. In order to maintain our high pace of growth, we have accepted a lease-financing offer from a leading actor in the Chinese market for a maximum of up to 100 MSEK. This financial provision carries an annual interest rate of 8% and is amortized over the span of three years. Capital-wise, this amounts to same thing as if the bond offer had been over-subscribed. We remain on solid ground, with a very long-term income and predictable cash flow in hand.  The subscription-economy model we are building in ASRE will come to further the interests of our shareholders in the two decades before us.

The information contained in this press release conforms to that which SolTech Energy Sweden AB (publ.) is required to make public according to the EU’s regulation 596/2014 concerning securities market abuse. Said information is furnished, via the above-cited contact person’s authorization, for publication on 19 October 2018, 15:30 CET.

SolTech Energy in brief
SolTech Energy develops and sells esthetic, building-integrated solar energy products for all forms of building structures – commercial, public and residential. The products are part of a building’s outer shell, as a roof or wall, with integrated solar cells for the production of electricity. The concern also operates in China, where the business model consists of financing, owning and servicing solar energy installations on the roofs of customer owned facilities, and of selling all the electricity produced. Soltech Energy Sweden AB (publ.) is traded on First North at Nasdaq Stockholm, under the symbol “SOLT” and has over 15,000 shareholders. Also included in the concern are its jointly owned (51%) subsidiaries ASAB in Sweden and ASRE in China. The company’s Certified Advisor is G&W Fondkommission (securities broker). For more information see: www.soltechenergy.com

Investment in China
SolTech’s investment in China is carried out by a jointly owned company, Advanced SolTech Renewable Energy (Hangzhou) Co. Ltd (ASRE), where SolTech owns 51 percent and Advanced Solar Power Hangzhou Inc. (ASP) owns 49 percent. The business model consists of having ASRE finance, install, own, and periodically service solar energy installations mounted on the roofs of customer-owned facilities. The customer does not pay for the installed solar energy unit, but instead undersigns a long-term, 20-25 year contract to buy all the electricity the relevant unit produces. ASRE’s current income comes from the sale of electricity to customers, along with various forms of subsidies based on kWh production. Focus is now concentrated on building a backlog of orders for 2018 and beyond, with the goal of obtaining an installed capacity of 605 megawatts (MW) by the close of 2021, which in 2022 will be set into full operation, generating current annual sales amounting to approximately 1 billion SEK (ca. 100 MEUR). 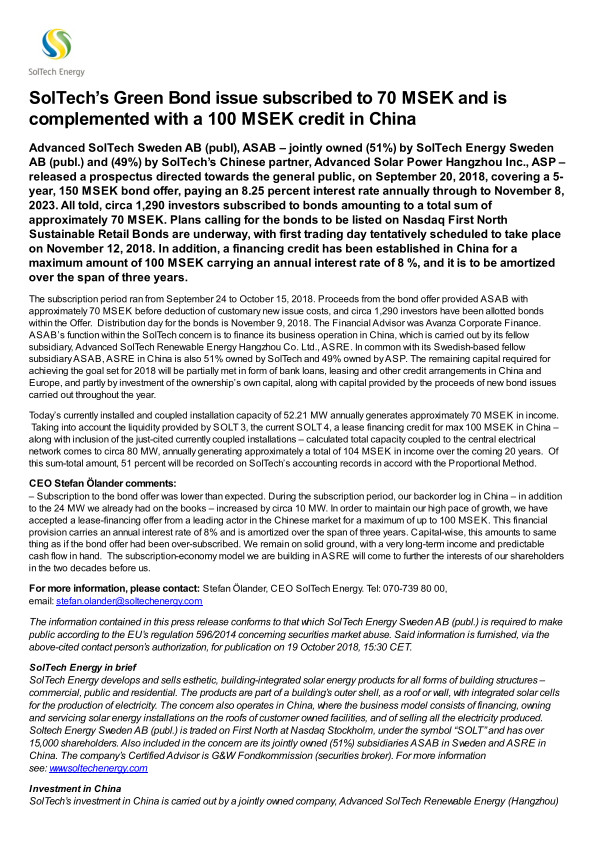 Manage Cookie Consent
We use technologies like cookies to store and/or access device information. We do this to improve browsing experience and to show personalized ads. Consenting to these technologies will allow us to process data such as browsing behavior or unique IDs on this site. Not consenting or withdrawing consent, may adversely affect certain features and functions.
Manage options Manage services Manage vendors Read more about these purposes
View preferences
{title} {title} {title}